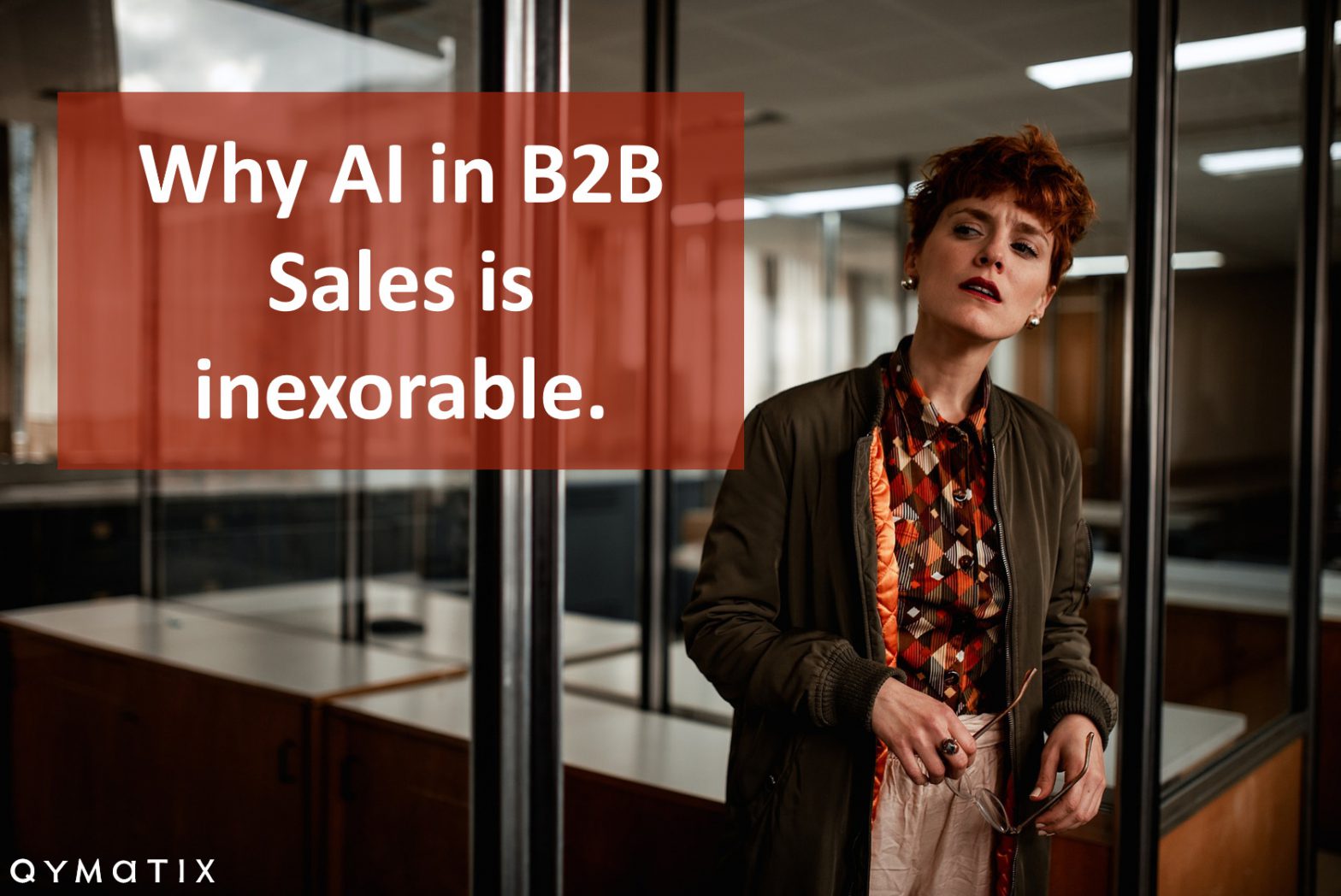 Why using artificial intelligence in B2B sales is inexorable.

Would there be a B2B digital transformation without predictive analytics software?

What comes to mind when you think of Thomas Alva Edison? My first thought is still: The first inventor of the light bulb. And this, although a well-known fact, is not entirely true. He optimized it and thus made it suitable for mass use – but he didn’t invent it.

Similarly, we credit Samuel Morse with having invented the electric telegraph. Morse did indeed independently develop and patented a recording electric telegraph in 1837. However, he was not alone. There were, in fact, five claimants, including the German physician, anatomist, and inventor Samuel Thomas von Sömmering.

We assume that Darwin is the creator of the brilliant theory of natural selection. Only such a genius could have come with such a beautiful, precise formulation of the origin of the species.

Wrong. On the Origin of Species may never have been published, had it not been for Alfred Russel Wallace, another naturalist who independently offered a strikingly analogous theory in 1858.

Do these examples infer that innovation would happen regardless of the innovators? Does it mean innovation itself is unavoidable? What does this last thesis suggest for the B2B digital transformation?

The lightbulb would have happened (maybe later) without Edison, the Telegraph without Morse, and the theory of evolution without Darwin. Someone else did indeed arrived at the same conclusions or technologies.

I expect the same inexorability of AI in Sales. It will happen without you and me, with or without Qymatix Predictive Analytics Software.

It will happen regardless of whether you or your main competitor adopts it.

Artificial Intelligence in B2B Sales is happening already, and you might be missing out.

With the advent of the internet at the end of the 1990s, it was impossible for search engines not to be invented. We can argue the same for lightbulbs in the 1870s, thanks to electrification.

“It is a singular fact, that probably not an electrical invention of major importance has ever been made but that the honour of its origin has been claimed by more than one person.”

Dorothy Thomas and William Ogburn of Columbia University produced in 1922 a list of almost 150 cases of near-simultaneous inventions by more than one person, including the telescope, typewriters, and photography.

These examples show us an interesting paradox: each inventor is dispensable. Although we are prone to believe that an Elon Musk invented electric cars on his own, the guy is replaceable. If Page and Brin had not met in University or died in a plane accident, we would still have search engines. Innovation always happens.

It is, therefore, by the same principle, it is unavoidable that innovations in B2B sales due to the advent of artificial intelligence will happen. They are already happening. They were inevitable. The state of the underlying cloud and analytics technologies have reached the point where AI in sales is bound to appear, no matter who drives it.

How can artificial intelligence help my sales team?

The future of sales is artificial intelligence.

If using our tool sounds like a no-brainer for companies with expensive sales teams, hundreds of products and customers and thousands of sales transactions, well, it is a no-brainer that AI can predict the future better than us.

However, when we launched our tool in 2018, the General Manager of a mid-size industrial wholesaler business shocked one of my sales guys over the phone.

“I don’t think there is any new technology in B2B sales – we’ve been selling this way for 20 years and always had happy customers.” – he told us.

My sales representative was abashed to recognise the strong scepticisms she had encountered. I was not entirely surprised. Innovation is one of those ideas that everyone favours in general, and everyone finds a justification to be against in particular cases.

Innovators are never welcomed and encouraged. They struggle with the cautious conservatism of human, and the barriers to entry erected by patents, regulations, standards, and licences. Furthermore, they must fight the market incumbents and businesses left behind by the technological advance.

Why using artificial intelligence in B2B sales is inexorable? – Summary

Innovation happens regardless of who the innovators are. It is inexorable. Predictive Analytics Software for B2B Sales using Artificial Intelligence is an innovation that nobody can stop. AI in Sales is unavoidable.

Innovations are usually illogically overstated or likewise understated. Executives tend to exaggerate the short-term implications of innovation pompously and to miscalculate its long-term effects dangerously.

This concept has exciting implications for the B2B digital transformation. First, each innovator, be a company or an entrepreneur, is replaceable. Innovation will happen in any way.

If innovation will happen anyway, why to innovate then? Innovation is risky, cost time and energy. Innovators fight laboriously against the status-quo blindly ignoring the final fate of their invention.

Why so much fuzz? Because companies that do not innovate, die. If innovation stops, competitor takes over, and customers stop buying. I can state the same about AI in B2B sales. Do you think AI-based Predictive Sales is expensive? More expensive is not to implement it.

What innovations is your company driving in sales? Join our discussion today.

I WANT ARTIFICIAL INTELLIGENCE FOR MY SALES TEAM!

Steven Johnson (2015): How We Got to Now: Six Innovations that Made the Modern World.

Clayton M. Christensen (2011): The Innovator’s Dilemma: The Revolutionary Book That Will Change the Way You Do Business.

Why predictive analytics for CRM is not a magic ba...
Launch of Qymatix Online Academy Pilot
We use cookies on our website to give you the most relevant experience by remembering your preferences and repeat visits. By clicking “Accept All”, you consent to the use of ALL the cookies. However, you may visit "Cookie Settings" to provide a controlled consent.
Cookie SettingsAccept All
Manage consent